Erik:     Joining me next on the program is Daniel Lecalle, a professor of global economics and chief economist for Tressis.

Daniel, thanks so much for joining us on the program. You and I are taping this interview a day before our listeners will hear it on Wednesday. Just as we began our phone call, we broke to new lows on the S&P 500, below the previous low – back on Oct. 11, I believe it was.

I think the big question on everybody’s mind – I’ll summarize this: Is this the big one? Are we really at the point where this longest bull market in history is over? And we’re about to see either a crash or a new bear market? Or is this just a pullback that needs to play out and maybe we’re headed to new all-time highs?

Daniel: Thank you so much for having me on the show. I think that what we’re seeing right now is, basically, that markets are starting to get nervous about a number of catalysts that were not expected to happen.

The first one being that bond yields, the US Treasuries, the 10-year, would be rising above what was considered to be a warning zone level.

The second one is the yuan weakness and the decision by the Chinese government to try to tackle the alleged trade war through competitive devaluations.

Those two catalysts are doing two things. The first one is taking money out of riskier assets, out of emerging markets, out of the Eurozone equities, out of US equities, into safer assets.

The second one is sending deflationary signals to the rest of the world.

Prof Steve Hanke: M4 is the most under underappreciated indicator

Erik:     Joining me next on the program is Professor Steve Hanke from Johns Hopkins University.

Steve, thanks so much for joining us on the program. We’ve got you on at a time in markets where the equity market is starting to hiccup. A lot of people are questioning whether or not the central bank liquidity funded bull market might be coming to an end. I think it would be productive to get your perspective, not just immediately on the current situation, but going back to how we got here.

So, going back to the last crisis, from your perspective, what were the driving factors? How has it affected monetary policy? And what has actually been driving this massive bull market of the last 10 years?

Steve:  Well, thank you, Erik, for that introduction.

If you go back to the crisis, shall we say in 2008, and the start of the Great Recession in 2009, I think it’s important to note that the Fed has a propensity to blow bubbles and pop bubbles. So money is important. Money dominates.

And if you look at money, it’s always wise to look at broad money, the broadest measure of money, which actually is M4. And the best measure of it is what’s called the Divisia M4. It’s produced by the Center for Financial Stability in New York, not the Fed. The Fed has lousy numbers.

Prof Steve Keen: The Real Risk is in Private Credit

Erik:     Joining me next on the program Professor Steve Keen from Kingston University. Steve, it’s so good to have you back on the program. It’s been way too long.

I want to start with a topic that you and I have talked about a lot before, which is the massive overhang of sovereign debt around the world. And the view that I’ve been coming around more and more to is I’m convinced that we’re headed towards some kind of a financial crisis as a result of all of this excessive debt in the system.

The thing is, everybody seems to assume automatically, okay, financial crisis, stock market going to crash. And what I’m starting to realize is, boy, I think the driver is going to be bond markets, sovereign bond markets that are in some cases negative-yielding. I mean this is crazy. Eventually it all has to come falling down.

And I’m starting to wonder, is it necessarily the case that that means there is a stock market crash? Or could it be that if the bond market is distressed and Treasuries are no longer a safety trade? And that the stock market is actually supported by that?

Or maybe it’s not supported – it doesn’t get taken down as much. So the next financial crisis, which is the topic of a book that you wrote recently, and it has been extremely popular, we know there is a financial crisis coming. 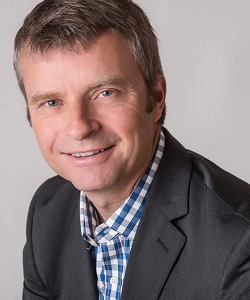