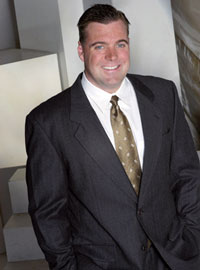 Erik Townsend is a retired software entrepreneur turned hedge fund manager. Throughout his career, Erik has capitalized on his ability to understand complex systems and anticipate paradigm shifts far in advance of the mainstream. A teenage computer protégé, he spent most of his high school years at MIT's Artificial Intelligence laboratory, where he taught himself several computer programming languages. Erik became an independent software development and design consultant to Digital Corporation's manufacturing systems technology group at age 17. By age 20 he owned his first private aircraft, after earning his private and commercial pilot's licenses.

From his experience at MIT, Erik recognized that the IT industry's failure to embrace distributed computing translated to an exceptional entrepreneurial opportunity. At age 21, Erik committed himself to developing and commercializing distributed application software technologies he was first exposed to at MIT in the late '70s. By the mid-1980s, Erik had invented an approach to distributed system design that is now widely known as Service-Oriented Architecture (SOA). After applying SOA concepts initially at Digital Equipment Corp (where he consulted for nearly 10 years), in 1992 Erik founded the Cushing Group, a boutique consultancy focused exclusively on bringing advanced distributed application computing technologies to market. The Cushing Group's work with Wells Fargo Bank in the early 1990s paved the way for Wells Fargo to become the world's first Internet Bank by early 1995.

By 1998, Erik had grown The Cushing Group to 35 employees, $10mm annual revenues, and an exceptional 28% net operating income. The Cushing Group was well on its way to becoming the premier authority on SOA, and many expected the company to go public after a few more years. But Erik recognized that valuations for IT Service companies were ridiculously high at the time, and that an exit through acquisition was more prudent than waiting for an IPO in a market where Erik was convinced a bubble was forming.

After selling the Cushing Group to Ciber, Inc. (NYSE: CBR) in 1998, Erik briefly engaged a well-known investment bank to manage his assets, but was profoundly disappointed with their services. He subsequently took a deep dive into macroeconomic/fundamental investing and educated himself on the mechanics of derivatives trading. Erik has actively traded energy, grains, and precious metals futures markets since 2008, and has become a recognized expert in Peak Oil investing, having given lectures on that topic to Parliament in Belgium and at the ASPO technical conference. Erik has also become a financial podcast personality, having appeared regularly as the commodities commentator on a popular weekly financial program for several years.

Erik has become a passionate world traveler. He moved to Hong Kong in 2009 to get a better perspective on changing global economics. While living in Hong Kong, several hedge fund professionals he met there observed that through his own passionate trading activities, Erik was “already doing all the work of running a hedge fund except for picking up the phone and calling a lawyer and turning it into a fund”. Erik was flattered by the advice of his peers in Hong Kong to launch his own hedge fund, but wanted to finish his boots-on-ground evaluation of the global economy first. He spent just over sixteen months in 2011 and 2012 exploring the world, living in 28 cities in 18 countries during that period. Erik continues to live a very international lifestyle, and presently has homes in Hong Kong, Mexico and the United States.

Erik eventually took his Hong Kong friends’ advice to heart, and founded Fourth Turning Capital Management, LLC in 2013. Through that asset management company, he launched a Global Macro-strategy hedge fund in July 2013. In February 2016, Erik launched Macro Voices, a new weekly financial podcast program which will target professional finance, high net worth, and other “sophisticated” investors who desire financial content at a level of sophistication and complexity above what the retail investment-focused podcasts on the Internet presently offer.