All-Stars #101 Julian Brigden: USD and SPX outlook in the wake of COVID-19 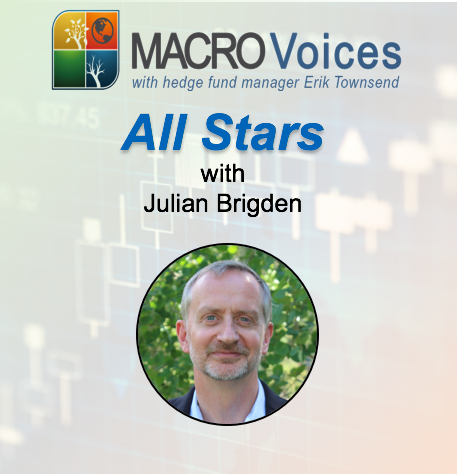 Julian Brigden, Co-Founder and President of Macro Intelligence 2 Partners brings diverse talents to the research process including an understanding of global markets and politics, as well as a love of history. Julian has over 30 years’ experience in financial markets and has held positions in market and policy focused consulting to hedge funds and banks, as well as in FICC sales. In 1999, he spent five years at Medley Global Advisors as the Managing Director of the G7 Client Team. From 2004 to 2011, Julian served as North American Head of Hedge Fund Sales at Crédit Agricole. He has worked in London, Zurich and New York at UBS, Lehman Brothers, HSBC, Drexel, Credit Suisse, and Salomon Brother in both foreign exchange and precious metals. In 2017, Julian partnered with Raoul Paul of GMI, in association with Real Vision TV, to create a lighter macro research letter with focusing on assets available to retail investors called Macro Insiders.

As a global macro strategist, not a journalist or economist by training, Julian’s primary focus is exploiting trading opportunities inherent in macroeconomic and policy related developments. He is particularly skilled at exploring correlations in the economy and financial markets. Julian has been featured on Bloomberg, CNBC, and in the WSJ, New York Times and Barron’s as well as other publications for his recent research on EM, QE, Oil, Bubbles, global FX, and liquidity.