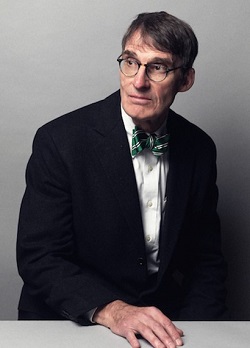 James Grant, financial journalist and historian, is the founder and editor of Grant’s Interest Rate Observer, a twice-monthly journal of the investment markets. His new book, The Forgotten Depression, 1921: the Crash that Cured Itself, a history of America’s last governmentally unmedicated business-cycle downturn, won the 2015 Hayek Prize of the Manhattan Institute for Policy Research.
Among his other books on finance and financial history are Bernard M. Baruch: The Adventures of a Wall Street Legend (Simon & Schuster, 1983), Money of the Mind (Farrar, Straus & Giroux, 1992), Minding Mr. Market (Farrar, Straus, 1993), The Trouble with Prosperity (Times Books, 1996), and Mr. Market Miscalculates (Axios Press, 2008).
He is, in addition, the author of a pair of political biographies: John Adams: Party of One, a life of the second president of the United States (Farrar, Straus, 2005) and Mr. Speaker! The Life and Times of Thomas B. Reed, the Man Who Broke the Filibuster (Simon & Schuster, 2011). His new biography of Walter Bagehot, the Victorian man of letters and financial journalist, will be published in 2018.
Mr. Grant’s television appearances include “60 Minutes,” “The Charlie Rose Show,” “CBS Evening News,” and a 10-year stint on “Wall Street Week”. His journalism has appeared in a variety of periodicals, including the Financial Times, The Wall Street Journal and Foreign Affairs. He contributed an essay to the Sixth Edition of Graham and Dodd’s Security Analysis (McGraw-Hill, 2009).
Mr. Grant, a former Navy gunner’s mate, is a Phi Beta Kappa alumnus of Indiana University. He earned a master’s degree in international relations from Columbia University and began his career in journalism in 1972, at the Baltimore Sun. He joined the staff of Barron’s in 1975 where he originated the “Current Yield” column. He is a trustee of the New York Historical Society. He and his wife, Patricia Kavanagh M.D., live in Brooklyn. They are the parents of four grown children.